For today’s edition of “Sketchy Thursday” I asked some of our design team members to create a project based on this fabulous sketch by Valerie Salmon. 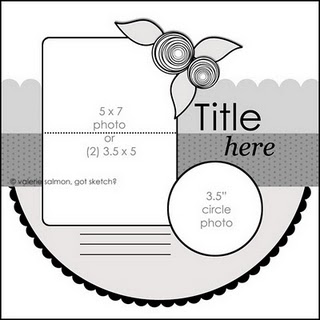 Design team member Lisa Kisch created this heartfelt layout by flipping the sketch counterclockwise so that her half circle appears on the right side of her layout.  Here’s what Lisa had to say … “”I was inspired by the half moon shape in the sketch, and I loved the idea of using a blow up photo, plus a smaller accent photo. I wanted to use both patterns in the Twitterpated Delight paper, so first I cut a large half-circle shape on one side, then cut it off and flipped it over to place both patterns side by side. The flower accent on the bottom left was created by layering a Paper Flower and Metal Brad over one of the Chips. I love the texture it adds!” 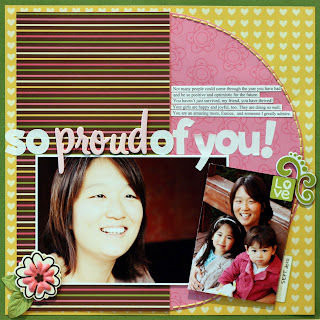 Design team member Deena Wuest created this absolutely adorable layout using lots of goodies from both our Twitterpated and Tree House collections.  Here’s what Deena had to say … “I love sketches. They cure that initial “Oh, dear – look at this blank white page” syndrome. They initiate the creative process then magically inspire to branch off and create something uniquely yours. I loved the unexpected circle element on the sketch but adapted it to create a free-flowing row of flowers to fit my layout. Positioning the green patterned paper vertically instead of horizontally instantly creates “stems” for the bed of flowers.” 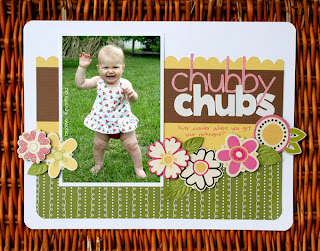 Design team member Ria Mojica really made the sketch her own on this fun layout.  Here’s what Ria had to say … “I love how the Twitterpated collection is girly but not too much that I can’t include my son in the photos because of the brown.   Because I used two 4×6 photos instead of the recommended 5×7 (or two 3.5 x 5 photos), I decided to let go of the circle shape in the bottom of the page in favor of a large rectangular block.  Instead of a 3rd circular photo, I used the space for the title.  I love love love the candy dots – they’re the easiest to use to add accents and look so yummy I actually want to eat them up!  I doodled the scallops on the brown cardstock to lighten up the brown and make the whole layout look more fun.” 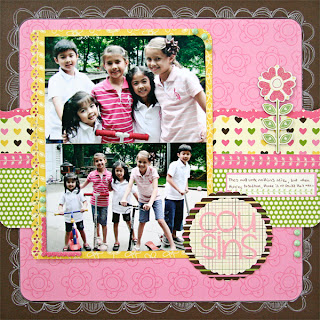